Was Eleanor Roosevelt a Feminist? 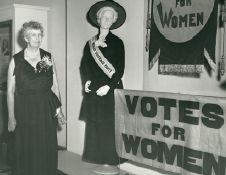 In honor of the passage of the 19th Amendment in 1919, former FDR Director Cynthia Koch examines Eleanor Roosevelt’s relationship with feminism. When her husband endorsed women’s suffrage in 1911, Eleanor proclaimed herself, “somewhat shocked as I had never given the question serious thought”. In her 1933 book, It’s Up to the Women, Eleanor wrote that she was not interested in the abstract idea of equality with men since it did not improve women’s ability to change society. So was Eleanor Roosevelt a feminist?